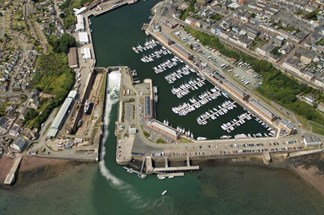 The contest to win the contract to build and install the new lock gates for the £5m Dock Lock project at Milford Marina is well underway.

Milford Haven Port Authority has short listed 8 companies from around Britain and they will now tender for the European funding backed project.  The successful contractors will be chosen in September.

Meanwhile the Port has completed further investigations to check the strength of the old lock walls to see how well they will cope with the new lock gates.

The new lock gates are to be designed and installed at Milford Marina over the next 18 months, transforming the way the Marina can be accessed and boosting marine tourism and business in Milford Haven. They will be constructed inside the existing lock and will offer fishing and marina clientele an improved locking service compared to the current lock operational timetables.

“The Dock Lock Project is progressing very well.  There will be no more disruption to the lock this year due to the project and we'd like to thank everyone for their patience following the disruption caused during the ground investigation works. I'm pleased we are still on target for improved access to the Docks and Marina before the end of 2013,” said Lynn Holloway, Dock Lock Engineer for Milford Haven Port Authority.

Building the new lock is part of a major investment undertaken by the Port Authority to make Milford Marina one of the top marine leisure destinations. The development is part of Visit Wales' Coastal Tourism Project, part funded by the European Regional Development Fund through the Welsh Government, to encourage tourism along the Welsh coastline.

For further information please contact Rachel Hicks or Amy Jackson at Radiant Media on 01646 650195 or 07917773756 or email pressoffice@radiantmedia.co.uk

Milford Haven Port Authority
Milford Haven Port Authority is responsible for the biggest port in Wales, and the third largest port in the UK, handling over 71m gross tons of shipping which amounted to nearly 49m tonnes of cargo during 2011. One of the most prominent on the West Coast, it is in the heart of the Pembrokeshire Coast National Park, the only Coastal National Park in Great Britain.

Milford Haven Port Authority is a trust port –an independent, commercially run organisation that has statutory responsibilities governed by its Acts, to maintain and improve navigation and the provision of Port and Harbour services and facilities.  All profits are retained within the Authority to fund these objectives.